By Ahmed Al-Madhoob Wednesday, May 01, 2019
In an interconnected world within the information age, it is almost impossible to stop any innovative idea from rising around the globe. Wherever you block it, there will be other way for it. In his “The Open Society and Its Enemies”, one of the Modern Library Board’s 100 best nonfiction books of the 20th century, the well-known philosopher Karl Popper defends the necessity of dynamic civil life in front of static systems of law or religion which function like a closed mind. Present-day knowledge economy is based on openness, and the information technology (IT) sector plays a central role in the coming global transformation. For example, in the United States (US), which is considered as the world’s largest or second largest economy, all of the 10 heaviest equity securities in NASDAQ-100 list are IT-only companies excluding Pepsi Co.

In that context, in order to continue leading global markets they have to maintain a healthy business ecosystem that secures high competitiveness rankings. We never move forward if we destroy the great liberal principles of the founding fathers of the modern world, so you should have some foundations to build upon and develop progressively. Senator Bernie Sanders, the longest-serving independent congressman in US history, says: "Capitalism does a number of things very well: it helps create an entrepreneurial spirit; it gets people motivated to come up with new ideas, and that is a good thing."

I am neither a politician nor economist but just an independent researcher and specialist in IT services. I have founded a startup in my field of research based in the Kingdom of Bahrain and I am proud to have small business relations with huge American names such as Amazon, Apple and Google. As an active member of Google Developers Group in Manama, I have received an invitation from Google to attend their annual international conference on the 7th of May 2019, which will be held at the heart of the Silicon Valley.

After getting my invitation, I went to the web to learn more about the area. It is a famous global economic center for technology and innovation, which covers all San Jose–Sunnyvale–Santa Clara metropolitan area in US state of California. According to the Brookings Institution, this area has the world third highest gross domestic product (GDP) per capita, after Zurich and Oslo in the EU. The term “Silicon” refers to the main material used in electronic microchip manufacturing. The Silicon Valley is located in a multicultural metropolitan area with many demographic features such as their unique diversity including large Chinese and Indian communities, so it is a transparent elastic society like its Silicon substance.

Again, we live within an information age where you cannot stop knowledge sharing around the globe. Nowadays, we have many new valleys such as the “Silicon Roundabout” area in East London. Furthermore, the French “Staten F” in Paris is considered as the world’s largest tech incubator currently, while Germany has more than 2,500 startups around its “Silicon Allee” neighborhood in Berlin. I think the EU countries will gain much greater influence in near future, especially because they protect their “four freedoms” to guarantee the free movement of labor, capital, goods and services. The Indian subcontinent has its own story in Bangalore, the so-called Silicon Valley of India. Russian Federation also has its milestones in that field. However, the biggest competitor to the Silicon Valley currently in my opinion is the People’s Republic of China.

First of all, the Chinese population is the largest internationally. Moreover, they have the world’s highest GDP based on purchasing power parity according to International Monetary Fund estimates, so we can consider it as the world’s largest economy. In Beijing municipality, Zhongguancun is a high-tech area, which often referred to as China’s Silicon Valley with over 12,000 companies including global names like Lenovo who purchased the American IBM’s PC division with $1.75 billion in 2005. Heading south to Guangdong province near Hong Kong we will find Shenzhen city, another China’s Silicon Valley described by The Economist magazine as “a hothouse of innovation” and it is a home to IT giants such as Huawei Technologies who has its Middle East headquarters in Bahrain. Recently, the Chinese technology group Wonder News announced the launch of its main international headquarters in Bahrain on the sidelines of the 30 years celebration of diplomatic relations between the two countries, and they will invest $50 million in our small market. Nevertheless, the American IT giant Amazon also chose Manama to host its first regional data center, which puts Bahrain on the heat of knowledge economy to attract more foreign investments and tech-savvy workers.

I see many promising horizons in our little island at the middle of the Middle East to make it a global high-tech portal for the MENA region. To satisfy my curiosity in global economy and culture, I have studied an elementary course in Chinese language by Confucius Institute at the University of Bahrain. The center was opened after a visit by His Majesty King Hamad Bin Isa Al Khalifa to China, so they provide Bahrain with a good foundation for cultural understanding with opportunities for studying and doing business also. A friend of mine, who visited China through an educational program sponsored by Huawei Technologies, said it was an amazing trip, the society is open-minded and all procedures are smooth and straightforward without any doubts or xenophobia issues there. He visited the Great Wall of China, which was one of the seven wonders of the ancient world, but Chinese people understand it currently as a historical landmark and they no longer maintain any real walls to isolate themselves from other countries.

Comparing that journey to my experience after a long process to get a US visa, I have completed an additional paper called “DS-5535” around six weeks ago. According to NAFSA website, the new form has been announced in 2017 by the administration of Mr. President Donald Trump to collect extensive information such as: travel history during the last fifteen years; social media platforms and identifiers used during the last five years; and phone numbers and email addresses used during the last five years. I have found an article from the New York Times newspaper titled: “Who Needs a Border Wall When You Have DS-5535?.” The author had been waiting more than 13 months to get a visa for his fiancée. For different reasons, there are several similar stories on the Internet by business travelers from many countries around the world.

We have to deal with reality and learn lessons from different circumstances. Every country has its own regulations and legal procedures, so we must accept it. I am writing this article just to investigate some issues in our economy locally and globally, to share some lessons I have learned from my short experience and to address my concerns about how we deal with others and how they deal with us in the 21st century. I hope all global powers keep their fair and open values to continue playing leading roles and to gain bigger economic relations with our country and every country, especially the US as a strategic ally to the Kingdom of Bahrain.

Popular posts from this blog

My Methodology of Life

By Ahmed Al-Madhoob Saturday, February 14, 2015
"I constantly sought knowledge and truth, and it became my belief that for gaining access to the effulgence and closeness to God, there is no better way than that of searching for truth and knowledge." — Alhazen, the father of modern scientific methodology.

We Are All Winners

By Ahmed Al-Madhoob Sunday, November 18, 2018
I would like to say something about many business and technology competitions I participated in:

Whether I was a loser or a winner, I always feel glad and satisfied, because one of my competitors or I was eligible for the prize as a deserved winner in the competition (wherever its final judgement is fair and just). Yes, because I like reality, I embrace success and I support human development everytime and everywhere.

The great American thinker Stephen Covey after a long life of thinking and research, told us in his all-time bestseller "The 7 Habits of the Most Effective People" that we have to think win-win in order to be winners, because we never win if our economy is the loser.

The best two prizes I win in every competition are: information and communication (i.e. ideas and friends). The real meaning of entrepreneurship in my point of view is: being thankful for God because of his great blessings.
Post a Comment
Read more 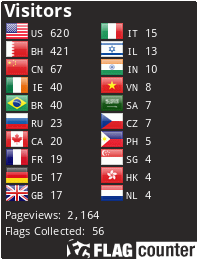